Getting past the fear of exposure

You are here: Home / Blogging / Getting past the fear of exposure

Sometimes these three facts collide and the result is chaos and despair. Graphic Novel level chaos. Wailing and gnashing of teeth despair. Oh woe is thee!

So what do these three things have in common and how could they possibly collide?

You have to tell people your story.

And that scares the crap out of a lot of people. In fact, it scares almost everyone! Telling people your story involves opening up to complete strangers. It exposes you to the fact that, well, some people just won’t like what you have to say or how you say it.

One of the biggest reasons I hear from small business owners who don’t have a blog is: they’re afraid to. They’re afraid of making a mistake, of being ridiculed, or of being vulnerable. Those are all legitimate fears. But that’s all they are – fear!

That and being eaten by zombies. Really, I don’t understand the recent fixation on zombies – they’re gross. Most of our fears are imaginary; we (I) obsess over scenarios that might happen and horrendous results that might occur. In reality, it just ends up being a typical, boring trip to the grocery store to pick up carrots and onions.

Our fears may not real, but they are not fictional

“So the boggart sitting in the darkness within has not yet assumed a form. He does not yet know what will frighten the person on the other side of the door. Nobody knows what a boggart looks like when he is alone, but when I let him out, he will immediately become whatever each of us most fears.” – Harry Potter & the the Prisoner of Azkaban

It might have been easy for poor Neville Longbottom to conquer the boggart using the Ridikulus spell, thus dressing Professor Snape in women’s clothes, but here in the real world, it takes more than waving a wand to conquer your fears. Lucky for us, there are a few things that work.

The one sure fire way to get over your fear of blogging.

I know, it sounds crazy, but it works!

Much like public speaking, fear of blogging is fear of being exposed. And the fastest, bestest way to conquer that fear is by doing. Repeatedly.

I used to be terrified of speaking in public. But I’m not anymore. In fact, I really enjoy it – it’s a wonderful way to educate a big group of people and a way to meet some truly lovely people. How did I get comfortable with speaking?

Your audience is thinking about themselves

When I was in marketing, I had to give presentations several times a week. Sometimes in front of some very powerful people. Talk about intimidation! Those first few (ok, DOZEN) presentations I gave were sweaty palm, shaky voice, knocking knees affairs. But I kept at it. Getting paid to do it didn’t hurt.

Don’t believe me? Here’s a little exercise I want you to do right now:

Think back on your favorite high school teacher or college professor. Think about what made their lectures so enjoyable. Do you remember any of the goofs they made? Well, maybe that one time when the chemistry professor got things mixed up and set off the fire alarms, but those guys do that for sport?

I’ll bet you never noticed how bad they were some days. You only noticed how good they were; how much fun it was going to that class. Most of them didn’t start out that good. They spent a lot of their first year with sweaty palms and shaking hands  before they got comfortable in front of a class. Then they got better.

You can overcome your fear of blogging

Need some more support? Need some basics on blogging? Check out the free 10 Part Tutorial that Dawn Barclay and I put together on Business Blogging School, it’s called How to Knock Blogging Fears on The Head. We wrote this just for you. We want to help you get over that fear of being exposed.

Have you put off adding a blog to your site because you are afraid of blogging? Is there something we missed in our tutorial? I’d love to hear about it, so please do leave a comment. 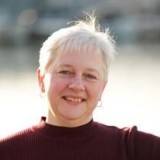